This month, we’d like to take some time to shine a motivational spotlight on a Marcy supporter and honor one of you. Our Motivational Spotlight is about sharing what we’ve heard.  A unique story. Your story, one that has stood out from the rest, served as a true inspiration, and true motivation.

We love to share your success stories and hope to inspire others to reach their goals. Here we will be sharing the story of Michael A. Moore.

In August of 2017, Michael weighed about 350 pounds and was told his weight was an issue. His doctor estimated Michael would have a heart attack in his 40s if Michael failed to lose the weight. To lose the weight initially, Michael had a gastric sleeve procedure done. To keep the weight off, Michael used his hard work and determination.

In this valiant effort to better himself, Michael also changed his eating habits and started exercising regularly. By 2018, Michael lost a whopping 163 pounds and kept the weight off through consistency and determination – the best weight loss plan there ever was.

During his embetterment journey, Michael returned to school to attain his bachelor’s degree in IT. After a couple of semesters, Michael made the President’s List and was inducted into the Sigma Alpha Pi Honor Society for maintaining his 4.0 GPA. Everything was flowing smoothly and according to plan when Michael became ill.

Michael was 37 years old when his life changed drastically. Michael became ill without reason (or so it seemed.) Michael fell into a coma and was put on life support in late September 2018.

Michael’s first memories out of the coma began near the end of October, he was under the impression he was in a coma all month. However, after speaking to doctors and family, he found out he was in a coma for two weeks, not four (during which Michael turned 38 years old.)

Michael later discovered he had viral encephalitis, but the source was unknown. Even after 12 different tests were conducted, the cause of the viral encephalitis remained a mystery. Because the virus was attacking his brain stem, Michael doesn’t recall the end of September through to the beginning of November. Upon waking up out of the coma, Michael was responding to family and doctors, but has no recollection of the first two weeks of being out of his coma.

After regaining total consciousness in November, Michael learned about the coma, loss of memory, and the unknown virus that caused it all. He also learned of the heartwarming support he was receiving all month. Michael “woke up” to many positive Facebook posts, cards, and texts from friends, family, and co-workers. Michael even received positive videos from NFL players Thomas Davis of the Carolina Panthers and Derek Anderson and LeSean McCoy of the Buffalo Bills at the time.

After the positive news of surviving, regaining consciousness, and support – it was time for the bad news. Michael was moved from the hospital to an in-patient rehab center, where he was barely able to move, sit up, walk, talk, or eat. “I was a mess,” Michael told us.

Michael was assessed and informed his motor skills were compromised and he might be able to walk 300 feet with the use of a walker for assistance at the end of two weeks of rehab. After those two weeks, Michael would be discharged and sent home.

At that moment, Michael decided he would defy the rehab’s expectations. Not just for himself, but for all the people who helped and supported him through the worst month of his life. And, Michael didn’t want his 4 year old son to see him struggling with rehabilitation once Michael returned home. 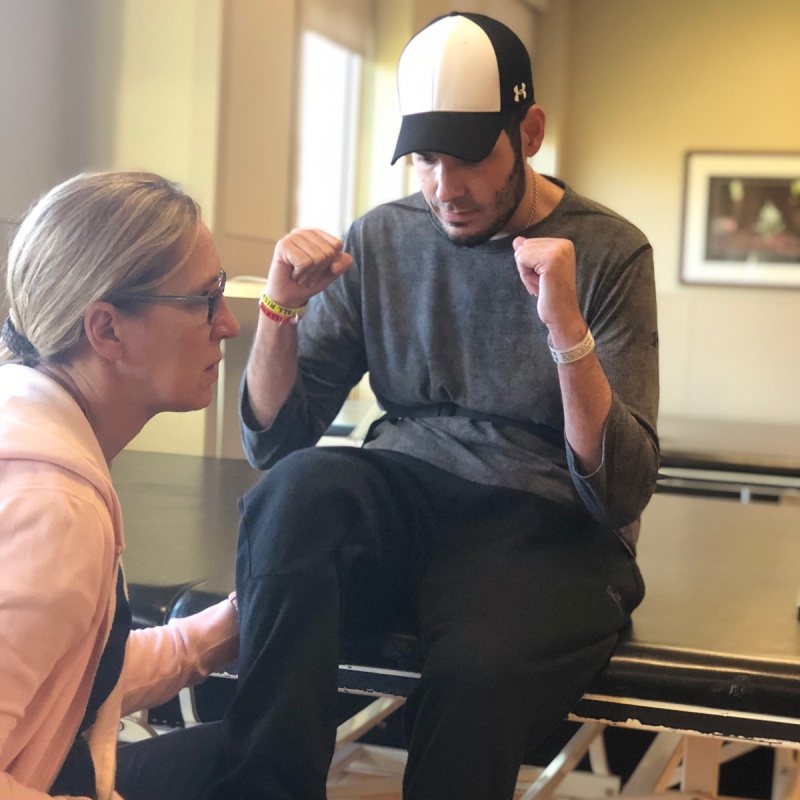 Michael put in hard work as soon as rehab began. On days where rehab was tough and Michael was on the brink of giving up, he would read all the support he received and get back to work. Michael said he must have watched the videos from the NFL players a 1000 times during his time in rehab to keep his spirits up. For two weeks Michael pushed and pushed and pushed through rehab.

In just one week and a half of rehab, Michael was walking 5000 – 6000 feet without the use of a walker. He was even doing a version of modified burpees during rehab. Needless to say, everyone who knew his story at the rehab facility was blown away by his progress. In the end, the rehab center was so impressed with Michael’s progress they put his story on a plaque and hung it in their facility. 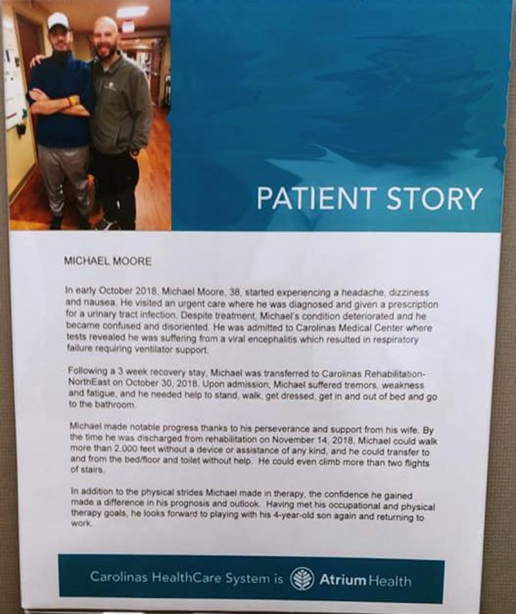 In the end, Michael never found out what virus caused this terrible event. The best conclusion doctors could come to was a mosquito bit Michael. Probably a mosquito that was carried in from a hurricane that hit North Carolina in September, but that is more of a guess than a conclusion.

We found out about this story because Michael left a detailed review regarding our products and his mishap. We then reached out to Michael to see if he wouldn’t mind sharing his story on our blog.

Below you will find an excerpt from Michael’s review and some additional words regarding the event. We are happy to hear Michael fought through his struggle and exceeded expectations. And, we’re honored Marcy equipment can help him continue the fight outside of the rehab facility.

“It has been a long journey and I am now doing alright I still have a lot of brain issues but I am a fighter and with that said I was looking for great weight lifting products to help me get back the muscle I had before all of this and I decided to purchase Marcy products.

I was blown away by how well built their products are and how easy they were to put together. By far the best home gym equipment I have ever purchased. Here is to the next step of #NeverGiveIn #NeverGiveUp”

“I have faced a lot of obstacles in my life and hardships but this by far has been the hardest.  I can no longer go to school because of my brain damage my brain does not work the same. But as for that I could barely walk, talk or move at all and now I can run, talk up a storm and lift weights so I will figure this out and learn to deal with what I have and I will #NeverGiveUp #NeverGiveIn.

I am so happy to share my story as going through what I went through put a new perspective on life and what matters and what doesn’t. If I can help even just a single person to keep fighting and never give up then I would be so happy to have paid it forward.”

This site uses Akismet to reduce spam. Learn how your comment data is processed.